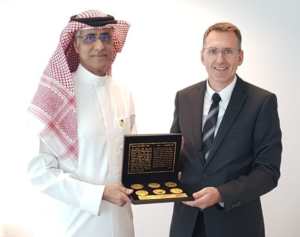 Chief Executive Officer of Bahrain Association of Banks, Dr. Waheed Al Qassim, confirmed Society’s readiness to provide logistical support and coordination to benefit the German banking sector from Bahrain’s advanced experience in Islamic banking industry. Bahrain has become a global hub in the Islamic financial services industry and the host of the largest concentration of Islamic financial institutions in the Middle East.

During his meeting with the German Ambassador at society’s headquarters, Mr. Kai Thamo Boeckmann, Dr. Al Qassim said: “The accumulated expertise in banking sector over a century, in addition to the legislative and regulatory efforts of the Central Bank of Bahrain, has created Bahrain’s advanced banking sector as model to follow even for countries with giant economies such as the Federal Republic of Germany.”

Dr. Al Qassim noted to the importance of achieving further cooperation between the banking sector in Bahrain and Germany. Dr. AL Qassim stressed Bab’s key role in strengthening economic cooperation between the two countries, and pushing forward efforts to increase the volume of Bahraini-German trade exchange, which reached US $ 632 million in 2017, according to the foreign trade indicators of the Central Informatics Organization.

During the meeting, CEO of BAB welcomed the participation of the German Embassy in Bahrain and representatives of the German banking sector to celebrate Bahrain’s 100th anniversary. Dr. Al Qassim pointed out that this participation represents an opportunity to enhance aspects of joint economic cooperation between Bahrain and Germany, in addition the development and strengthening of trade relations between the two countries.

Mr. Kay Boeckmann, in his turn, affirmed his country’s keenness to enhance economic cooperation with the Kingdom of Bahrain, create cooperation and partnership, and explore further economic and investment opportunities, including banking sector.

Furthermore, Mr. Boeckmann stressed the importance of exchanging visits between banking delegations in both countries to promote a promising trade and investment partnership between Bahrain and Germany, strengthen trade ties and consolidate partnership relations between Bahraini business owners and their German counterparts.

Moreover, Mr. Boeckmann paid tribute to BAB’s efforts to support and develop Bahraini banking sector, and to allow for greater cooperation between the banking sector of Bahrain and Germany.